This will be quick because I'm on my way to present my findings on the Mexico project (which I will share more about here after getting some feedback from the workshop today). 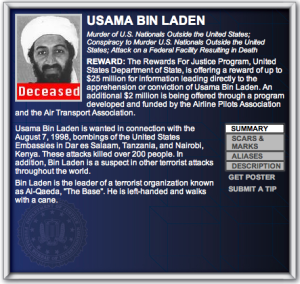 1. The Mission - The more details emerge about the mission to kill OBL, the more impressed I am with our Special Operations Forces. Apparently their helicopter wouldn't take off at the end of the raid, so they had to destroy it and find an alternate route. I'm sure they already had a backup plan or two, but this shows just how far we've come in the 30-plus years since the failed raid to recover Iranian hostages. As I note in my research, the specific method of removal (eg shot from a mile away with a sniper rifle or killed up close and personal like this seems to have been) has almost no effect on future levels of violence.

2. The Body - It took almost no time for conspiracy theories to start swirling around this, and it doesn't help that the body was buried at sea. There is a certain rationale to the whole treating his body respectfully thing, and the not giving terrorists a martyr's shrine thing, but I think the American people deserve a little more satisfaction than this. Ultimately if jihadists want to visit a site related to bin Laden's death, they can go to Pakistan and do so, whether his body is there or not. And I can only imagine the way that Saudi Arabia treats the bodies of criminals that it executes in the name of "Islam." I'll be interested to see if we do notice an uptick in violence once pictures/videos of his body actually are released.

Discuss in the comments section below.

UPDATE: Andrew Exum echoes my first point (about development of SOF since Desert One) here.