I had the chance to watch Public Enemies over the weekend, and highly recommend it. (It's from 2009, so yes, I'm behind on this.) The basic plot line is the effort by Melvin Purvis, of the Bureau of Investigation, to capture John Dillinger. It was the notoriety gained by the Dillinger case that would help the Bureau of Investigation to gain the "Federal" in its title, becoming the FBI under J. Edgar Hoover. 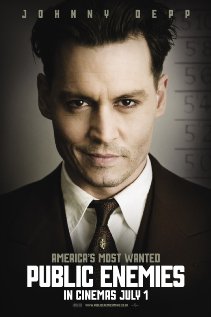 There's an interesting scene very early in the movie in which Hoover is sitting before an appropriations committee trying to get more funding. Hoover emphasizes the infamous nature of the criminals his agency is pursuing, and is met with the question of how many criminals he has personally arrested. The answer, of course, is zero: Hoover was a bureaucrat, who had risen through the ranks of the Justice Department. The year Hoover graduated law school is a key to understanding what follows--he finished in 1917, just as the US was entering the Great War. I can't help but imagine that the mobilization effort Hoover would have witnessed in DC and around the country at that time was an important factor in a very important metaphor he used later.

You see (and have seen, if you've watched the movie), Hoover was the first official to declare a "War on Crime." I am not aware of an earlier instance where war was employed metaphorically in this extensive, public way. The gruesomeness of the Civil War would have made that unlikely before Hoover. This metaphor has, of course, been used extensively since. War on Poverty, War on Drugs, War on Terror... it seems like the US government is always declaring war on something.

(more below the fold)

Two reasons come to mind for the popularity of the war metaphor (specifically applied to the Hoover-era "War on Crime" but applicable to later uses as well):

There are some other factors that made this metaphor successful. The most obvious is that gangsters had military-style weapons--the use of Tommy guns and automatic pistols is on display throughout the movie, and certainly offers the appearance of a battle, even if other circumstances are quite different. Another reason is the new-found mobility of the criminals: since they were able to move across the country at will, a national effort would be needed to stop them. This has become even more apparent on an international scale in the intervening years.
Using war as an official metaphor has had some important negative effects, though:

As we have added legal principles to the conduct of war with the Geneva conventions and so on, we need not add warlike principles to law enforcement efforts. The metaphorical use of war in these campaigns, as it has grown in influence and expanded in its applications, has been extremely harmful.