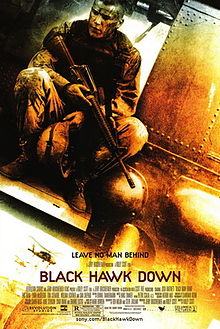 The post about movie scripts got a little long (sorry), but I wanted to share an anecdote that is hopefully more illustrative than boastful.

Several years ago on my first trip to DC, I had the opportunity to visit the Pentagon and meet a colonel with one of the coolest jobs in the world. His job was to coordinate Department of Defense assistance to movie and television productions. If the movie/show presented the military in a favorable light, it could receive greater access to (if memory serves) DoD installations, training procedures*, personnel, and equipment. This is why the producers of Black Hawk Down were allowed to use actual Black Hawk helicopters rather than having to paint older Vietnam-era Hueys black like some film crews have done.

Part of his job involved reading the scripts to determine whether the production would lend itself to a positive/accurate/patriotic/whatever view of the US armed forces. (Or intelligence agencies: he also showed us a script from the fifth season of the series 24 which was then in production.) While the colonel and his office exercise no direct editorial control over the final product, receiving this type of assistance is a huge incentive for the producers to cooperate with his criteria.

That is not to say that the quality of the final product is compromised--indeed the result is often exactly the opposite. But it does illustrate one point of the previous post: that there are mechanisms that influence the creative/scientific process that are often hidden from consumers of the final product. Again, I am not saying that this is an unmitigated evil, that people are bad, or that you cannot find this information if you look. I am suggesting that many readers have an interest in becoming informed members of one or more creative communities, and that they will be well served by digging a little bit deeper and finding the information that is available.** Gaining a clearer perspective on the iterative nature of the creative/scientific process will change the way you think.

*See the special features on the Black Hawk Down DVD if you don't believe this one.

** As a counter-example, we also at MRE's in the colonel's office for lunch. I have significantly less interest in seeing how those are made....