From the Pew Forum on Religion and Public Life:

Conflict between religious groups, by contrast, does not loom as a particularly large concern for most of the evangelical leaders surveyed. A majority says that conflict between religious groups is either a small problem (41%) or not a problem at all (14%) in their countries - though a sizeable minority considers it either a moderately big problem (27%) or a very big problem (17%). Those who live in the Middle East and North Africa are especially inclined to see inter-religious conflict as a moderately big (37%) or very big problem (35%). Nine-in-ten evangelical leaders (90%) who live in Muslim-majority countries say the influence of Islam is a major threat, compared with 41% of leaders who live elsewhere.

On the whole, the evangelical Protestant leaders express favorable opinions of adherents of other faiths in the Judeo-Christian tradition, including Judaism, Catholicism and Eastern Orthodox Christianity. But of those who express an opinion, solid majorities express unfavorable views of Buddhists (65%), Hindus (65%), Muslims (67%) and atheists (70%). Interestingly, the leaders who live in Muslim-majority countries generally are more positive in their assessments of Muslims than are the evangelical leaders overall.

Step back and think about what's going on here for a second. How can 90% of respondents in Muslim-majority countries view Islam as a major threat, yet less than two-thirds of them have unfavorable views of Muslims? (So much less than two-thirds, in fact, that it brings down the average. I'll get more details on this eventually.) 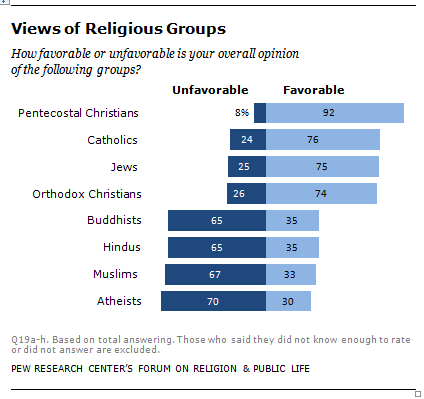 A couple of possible explanations come to mind. The first is simply that people are inconsistent, which is not unusual with polling data. Another possibility is what we might think of as a corollary to the old "my best friend is black" trope. In that expression--which I think was made popular by Chris Rock, but can't find video confirmation at the moment--white people excuse themselves from charges of racism by claiming a close relationship with a black person. What the Pew data shows is the opposite of this: evangelical leaders are claiming that Islam is a threat, despite the fact that they have favorable views of Muslims, which I take to include at least a few friendships.

This may be because, when asked if they view Islam as a threat, their first thought was of organizations like al-Qaeda or the authoritarian governments they live under, rather than the Muslims they see at the marketplace or across the dinner table. I'm not here to point fingers and say that they should be above this kind of issue salience. Rather, it shows just how difficult it will be to get most Americans who don't have friendly everyday encounters with Muslims to change their minds about the threat they present. Which means that we have a long and difficult road ahead, simply because we are leaving blinders on.