Shorter than a tweet at only 32 characters but having a lifespan of years and visible to all who pass within about 30m, your SSID - the name of your WiFi router - may have more reach than your twitter account.

The lifespan of a tweet is about one hour. After that it sinks into oblivion. Estimates of the average number of twitter followers range from 26 to 127. A single tweet will reach 50 or so people. If you live in a city your neighbours, your guests, the guests of your neighbours, even the pizza guy all have a good chance of seeing your wifi router. If you live near a busy street, even better!

Are WiFi names being chosen to make points? Catching the bus home in Buenos Aires recently, I was idly trying to find an open hotspot when I noticed the names of 3 politicians appear as SSIDs within just a few blocks - Moreno, Cristina and Nestor. Each of these could well be a coincidence, but taken together amongst all the linksys, FT7898, Motorola SSIDs they stood out as tokens of political allegiance. I decided to look deeper into the data: are WiFi SSIDs being used to fly political colours? 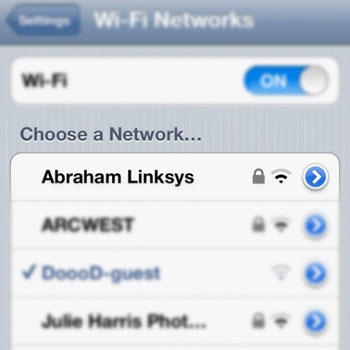 That's from a post at OpenSignalMaps that's worth reading in full. As the name implies, they have some really cool maps. The conclusion of their study (from Buenos Aires):

What does seem clear is that, of the routers clearly showing political sentiment, the sentiments are mostly positive with 114 supporting either Cristina, Nestor or Peron and 4 against. Another 580 we've tentatively put down as positive. Though CFK enjoys support from many quarters (and won a 54% majority recently) we would expect more routers to be named unfavourably. In Argentina, it seems people are more comfortable broadcasting positive sentiments via WiFi names.