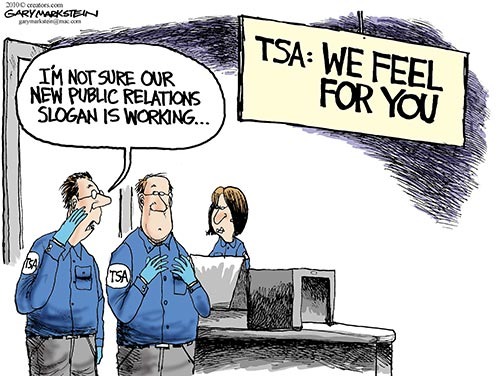 Those who know me in person follow me on Twitter are probably aware of my disdain for current TSA procedures. However, there is a glimmer of hope in this article from USA Today. The article describes new technology to be deployed at Dallas's Love Field over the next few years.

The Federal Aviation Administration projects the number of passengers flying inside the USA will nearly double in the next 20 years, to 1.2 billion. Security has slowed since the attacks of Sept. 11, 2001. Before then, about 350 people passed through checkpoints each hour, the IATA says. A November survey at 142 airports found processing times fell to 149 an hour, with the worst at 60, Dunlap says.

The proposed solution will involve implementing technology to identify the "riskiest" passengers and expose them to additional scrutiny, while letting most passengers move through much more quickly and conveniently than they can today. I have some privacy concerns, but benefits are tangible:

Passengers would walk with their carry-ons through a screening tunnel, where they'd undergo electronic scrutiny — replacing what now happens at as many as three different stops as they're scanned for metal objects, non-metallic items and explosives.

Passengers would no longer have to empty carry-ons of liquids and laptops before putting them on conveyor belts for X-ray scans. They could keep their belts and shoes on. They could avoid a backlog at full-body scanners and a finger swab for explosive residue.

Additional scrutiny since 9/11 has indeed stopped several attempts by hapless idiots, but the unseen cost of increased travel time is immense. This effort to speed up the process is much-needed.