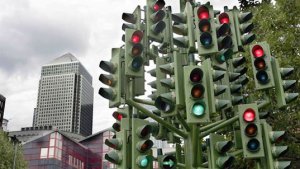 This blog has recently discussed jaywalking, and has covered traffic signals as both metaphor and fact numerous times (here and here, for example). But Matt Yglesias does not read this blog, so he writes:

A political movement genuinely focused on freeing people from the coercive authority of the state would spend a ton of time tackling the everyday tyranny of traffic signals, lane striping, jaywalking laws, and the dozens of other similar regulations that impinge upon the day-to-day lives of hundreds of millions of law-abiding American citizens.

To which Will Wilkinson responds with this from David Schmidtz:

Consider that the whole point of fences, and of rights, is to get in the way. Or to use a different metaphor: rights are like traffic lights. A mere liberty is a green light. A full-blooded right is a green light combined with a correlative red light. Some rules are better than others at unobtrusively enabling people to get on with their business. Traffic lights facilitate traffic movement not so much by turning green as by turning red. Without traffic lights, we all in effect have a green light, and at some point traffic increases to a point where the result is gridlock. By contrast, a system in which we take turns facing red and green lights is a system that keeps us out of each other’s way. Of course, the system itself gets in the way when it presents us with a red light, but almost all of us gain in terms of our overall ability to get where we want to go, because we develop mutual expectations that enable us to get where we want to go more peacefully and more expeditiously....

Property rights are, among other things, red lights that tell you when the right to use the intersection belongs to someone else. Red lights can be frustrating, especially as a community becomes more crowded, but the game they create is not zero-sum. When the system works, nearly all of us get where we are going more quickly, safely, and predictably than we otherwise would, in virtue of having been able to coordinate on a system that enables us to know what to expect from each other.

This idea of rights as traffic signals is not one that I have considered before, but I will be thinking more about it in future micro-institutions posts. By the way, I am not doing full justice to the arguments of Schmidtz, Wilkinson, or Yglesias in this post; I am mainly trying to make the connection between their ideas and similar things that I have written as a jumping off point for future conversations.