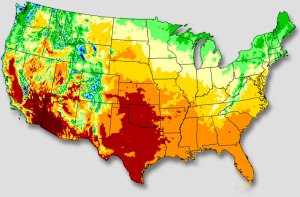 Over at Slate, Daniel Engber reports on the bizarre backlash against air conditioning:

A certain class of Americans—let's call them the brrr-geoisie—has come to see the air conditioner as a stand-in for everything that's wrong with the country and the world. In my neighborhood in Brooklyn, cafés now throw open their windows in the dead of summer. They won't succumb to a culture of gas-guzzling SUVs and soda-swilling layabouts! They'll give us a place to endure the heat, to suffer the heat, to pretend to enjoy the heat, all while we sit in sweaty judgment of our neighbors.

The main argument against AC is its contribution to global warming. Don't think for a minute that these critics are willing to give up heat in the winter, though. This hypocrisiy is partially ignorance: Engber points out the fact that "we use more energy to heat our homes (41.7 million BTUs per year, on average, at a cost of $631) than to cool them (7.8 million BTUs, at $276)." Growing up in Texas, it was easy to see how the settlement of much of America west of the Mississippi would have been far more difficult without air conditioning.

But the parts of the country that have been opened up since the advent of AC--the Phoenixes and Houstons of the Sun Belt--share an interesting trait:

Now we find ourselves in a quiet culture war between the brrr-geoisie and the conditionistas, the Rust Belt and the Sun Belt, the blue states and the red ones. Two-thirds of Democrats believe we're seeing the effects of global warming, versus one-third of Republicans. In the 2004 election, George W. Bush took nine of the 10 hottest states in the country, and four years later John McCain won eight of 10. If you take both those elections together and throw out the outliers—Alaska and Hawaii—then the states that lean right are more than 5 degrees warmer, on average, than the ones that go left. (For reference, that's what separates the climates of Delaware and Arkansas.) These divisions now seem to play out in every twist of the A/C knob.

It is hard to imagine a plausible causal interpretation of this fact, but it is an interesting correlation. Is it possible that causation works the other way around--do political views influence perceptions of temperature? According to a recent study from the University of Oklahoma the answer may be yes:

So much so, in fact, that the people surveyed all but ignored their actual experience. No matter what the weather records showed for a given neighborhood (despite the global trend, it had gotten colder in some places and warmer in others), conservatives and liberals fell into the same two camps. The former said that temperatures were decreasing or had stayed the same, and the latter claimed they were going up. "Actual temperature deviations proved to be a relatively weak predictor of perceptions," wrote the authors. (Hat tip to Ars Technica for finding the study.)

This reminds me of an earlier post in which I related Wilcox, Sigelman, and Cook's (1989) finding that local climate may influence responses on "feeling thermometer" survey questions. The connection between weather and political views is an interesting one. Political views cannot directly influence the weather (on a short-term basis at least), but they may influence where people decide to live. Researchers looking to use weather as an exogenous variable should keep this in mind.