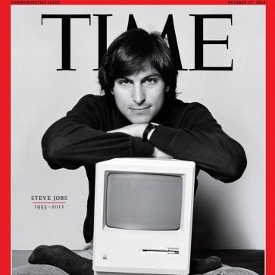 Steve Jobs' attitude toward time comes through clearly in the Walter Isaacson biography. This trait seems to have been ingrained well before his years spent suffering from cancer. According to Steve Wozniak, as early as 1985 Jobs acknowledged that his drive to create stemmed from a sense that he might die young. Two particular attitudes toward time show up in the book: respect and focus.

Respect for others was not a trait Jobs had in spades--you were either a genius or an idiot in his dichotomous view of the world--but he respected time. He was particularly reluctant to waste users's time. Even a small delay becomes immense when aggregated across many users:

One day Jobs came into the cubicle of Larry Kenyon, an engineer who was working on the Macintosh operating system, and complained that it was taking too long to boot up. Kenyon started to explain, but Jobs cut him off. "If it could save a person's life, would you find a way to shave ten seconds off the boot time?" he asked. Kenyon allowed that he probably could. Jobs… showed that if there were five million people using the Mac, and it took ten seconds extra to turn it on every day, that added up to three hundred million or so hours per year that people would save, which was the equivalent of at least one hundred lifetimes per year. (p. 123)

Jobs also mastered an ability to focus. "Deciding what not to do is as important as deciding what to do," he said. For example, Jobs implemented this practice when he simplified Apple's bloated product line down to a simple 2x2 grid (consumer/pro and desktop/portable). Nietzsche also highlighted this trait in Human, All Too Human (1878):

In reality the imagination of the good artist or thinker produces continuously good, mediocre, or bad things, but his judgment, trained and sharpened to a fine point rejects, selects, connects… All great artists and thinkers are great workers, indefatigable not only in inventing, but also in rejecting, sifting, transforming, ordering. (quoted in Jonah Lehrer's recent Imagine, p. 75)

Placing value on time, then, leads us to cut away the unnecessary.