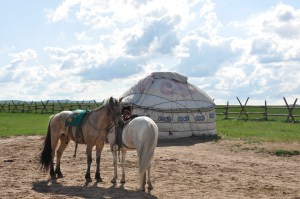 A Pair of Horses in Mongolia[/caption]

Going back to the "big question" theme at the heart of this blog, let us consider two stories about where governments come from. Ideas about this have been around as long as governments have, which is a long time. But great thinkers from antiquity like Aristotle, or Enlightenment philosophes like Rousseau, will be the topic of another post. Today we will consider the accounts of two economists--Mancur Olson and Robert Nozick.*

Nozick's account is a defensive one: faced with threats from inside or outside their community, individuals form "protective associations" (think tribes). His model implicitly recognizes that individuals have differing abilities to commit violence. By pooling resources--including a comparative advantage in violence--the group as a whole can be safer and more successful. However, Nozick argues for a minimal state that performs only these basic protective functions.

Mancur Olson tells a slightly different story. In Olson's account, individuals have already divided into tribes, and are either farmers or bandits. The farming tribes stay in their villages, while the bandits roam from place to place ransacking everything in their path. Eventually, a bandit recognizes that he could be more prosperous by staying in one place and protecting the villages from all of the other bandits, in exchange for a fee (tax) that is less than the 100 percent that other bandits take. This innovator becomes the "stationary bandit," i.e., government.

Both of these stories are compelling, but how will we ever know whether either are true? Last week, I had the treat of reading a paper where social scientists take on this big question. Smith, Skarbek, and Wilson conduct an experimental test of Nozick's theory.** They use a laboratory experiment in which individuals have differing amounts of a resource and can use it for offense, defense, or economic growth. They found that allowing individuals to form groups led to an "us versus them" mentality, rather than the cooperation Nozick would have expected. Although they do not discuss this in the paper, Olson's account may be more consistent with their findings.

*Note: As in other posts of this type, I gloss over important details and do injustices to the arguments of brilliant minds in order to focus on a key distinction. If you want to shed further light on the topic, there is a comments section.

**Full disclosure: David Skarbek is a personal friend, and had a visiting professorship at Duke.