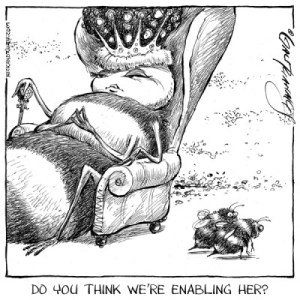 From lion kings to queen bees, political metaphors for animals abound. But do animals really think and act in a political manner? Tom Seeley, and entomologist at Cornell, thinks so:

[He] has written a lovely and compelling book titled Honeybee Democracy which suggests we turn to the bees to see how they make decisions. Thanks to the work of Seeley and his collaborators, it is now clear that honeybee hives really are democratic. When it’s time to look for a new nest, options are weighted by the evaluations of many different bees about a site’s qualities—its size, its humidity, the density of surrounding flowers. Individual bees vote with dances, and when the number of dances in favor of some particular site is high enough, the masses are swayed. Together, citizen bees choose, if not perfection, the best possible option.

In ants, choices about how to nest or feed also seem democratic, though a few experts influence the process. Some ants just know more than others.

Forms of democracy also exist in flocks of birds (who must decide when to fly) and troops of monkeys (who decide when to move). In each of these situations, consensus is necessary, and consensus is reached by some form of voting. Democratic decision-making is common in nature; humans did not invent democracy.

There's more at Slate, including parallels to our own elections.