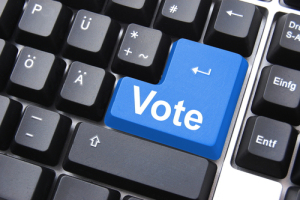 There are 96 million smartphones and wireless PDA's in the US. As of 2012, none of them can be used to cast a ballot in a US election. In an age where you can do almost everything else online, though, some observers are asking when this might change.

Voting electronically from somewhere other than a polling place is technically known as i-voting. Australia allowed i-voting for its overseas defense personnel in 2007. Deployed troops with residency in California can also vote by e-mail. The Indian state of Gujarat introduced remote electronic voting in 2011, and about three-quarters of ballots were cast that way. The most famous example of internet voting is Estonia. The option was first available to Estonians in 2005, and has grown rapidly in popularity in subsequent biennial elections. France, Latvia, Sweden, and Switzerland have also tested out the idea.

Of course there are security issues to be worked out:

Viruses could be used to take over voters’ phones; rogue countries like Iran could commandeer computers and change results without our knowledge; government insiders could write software that decides who wins; denial-of-service attacks could take down the Internet on Election Day.

In 2010, researchers from the University of Michigan demonstrated this risk by attacking an internet voting pilot project in Washington, D.C.

But there may be an upside to balance out the risks: increased turnout. That has been the result in at least one of the Canadian cities that introduced i-voting:

In all, 80 Canadian cities and towns have experimented with Internet voting in municipal elections. The town of Markham, in Ontario, has offered online ballots in local elections since 2003.

An independent report by digital-strategy firm Delvinia showed that early voting increased 300% the first year Internet voting was allowed. Twenty-five percent of the people who voted online in 2003 said they didn't vote in the prior local election, and overall turnout rose nearly 10% from 2006 to 2010, according to the report.

The link in the CNN piece appears to be broken, but you can read Delvinia's internet voting reports here.

Internet voting still has its downsides, and current technology is a long way away from being able to provide the security necessary for widespread i-voting in the US. But with California's existing system and New Jersey's recent experiment, we are one step closer to the future.