Via the Browser, Marc Herman has a gem of a post.

Secession efforts — serious ones — are surprisingly common. In living memory, the east of Czechoslovakia has become independent Slovakia, and the Soviet Union has become at least 15 and arguably 17 countries (depending on how one counts Chechnya). The fall of the Berlin Wall in part began with declarations of independence in the Baltic states. Scotland has negotiated a referendum for independence for 2014. Quebec already held a referendum in 1995; it failed. Singapore left Malaysia peacefully in 1965. Biafra tried to leave Nigeria in 1967, resulting in war. South Sudan successfully separated from the rest of Sudan last year. Yemen was North Yemen and South Yemen for a while, then became a single Yemen, nearly separated again, and remains in flux. Dividing Belgium into two countries is on the table so often, the only detail they’d need to hammer out is who is seceding from whom.

A little over a week ago, parties scheming to break the Mediterranean region of Catalunya away from Spain won local elections, and are now negotiating a pact toward an independence referendum.

So what do successful secession movements have in common? And how what could breakaway movements in the US learn from them? Here is a digested version:

It's also interesting to see how strong federal systems--the US, Germany--manage to counteract some of these steps. For instance, professional sports teams in the US are strongly identified with particular cities, not states. College sports are more state-centric, but even then the main rivalries tend to be within rather than between states (UT/OU providing a notable counterexample). I wonder whether and how secessionist sentiment is aligned with sports affiliations.

Thanks to Neil Caren we can at least see how it looks by county (click the image for more info): 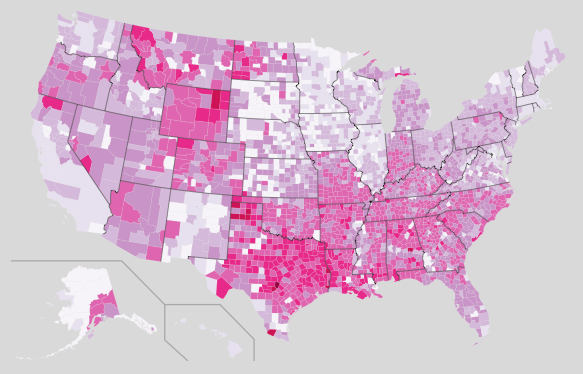