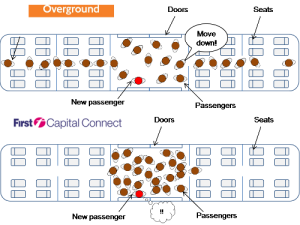 My favorite new blog find in a while is that of Brendan Nelson. Like your author here, he admits to "overanalysing mundane topics" but he does me one better--he draws detailed diagrams to accompany his analysis. Today and Friday I will share a couple of his posts about commuter trains to go with the longstanding interest of this blog in the politics of transportation.

Brendan explains how norms emerge among commuters on the same route due to their repeated interactions:

People who share a regular journey eventually form communities based around shared patterns of group behaviour rather than personal relationships. A well-known example from the Tube can be seen when people boarding the train stand aside to let others get off first – that’s a behavioural pattern that Tube travellers follow, and new travellers quickly learn. Lots of these little patterns exist among commuter communities which, despite being only temporary rush-hour formations, are communities nonetheless.

But these norms are different on the two routes Brendan takes--the Overground and the City train (in London):

On Overground trains an unspoken rule is, “move down the carriage”. Travellers follow this rule silently – as space appears further down the carriage, people move up to leave space nearer the doors. When the rule is ignored and an unnecessary crush develops, the offenders are loudly admonished – “can you move down please!” – and things soon right themselves.

But on the City commute things are different. A train pulls into the platform and there’s lots of space. But then you look at the  doorways, and it’s jammed solid – everyone has bunched up near the doors. You think, that’s not a problem; people will move. But this isn’t the Overground. The people in the doorways, already uncomfortably compressed, simply inhale sharply as you wedge yourself in next to them. The train is silent. No-one moves, and no-one is asked to move.

This community seems to have a different rule – “don’t rock the boat”. Shouting into the sheer silence would mark you as a lunatic. It’s a powerful rule: I’ve seen people abandon their attempts to board the train, choosing to wait ten minutes for the next one rather than cause a fuss by telling people to move into the empty space.

Brendan gives three reasons for these differences, but for that you will have to visit his post.