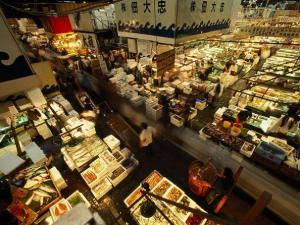 I'll ask the question in the same form that I originally heard it: "Why does Manhattan have the best shrimp?"* It makes sense why Portland (Maine) or Boston would have great lobster--the shellfish are harvested nearby. But even though shrimping locations are far from New York City, Manhattan restaurants can regularly get high-quality, plump shrimp. Likewise for juicy red apples and other nice produce--all from many kilometers or even continents away. If the "buy local" movement is all its cracked up to be, shouldn't the location where these items are harvested be the best spot to purchase them rather than the concrete jungle?

The answer involves transportation costs. Put yourself in the shoes of a Central American farmer for a moment. You have harvested a bumper crop of avocados or bananas, or another perishable crop. In your local marketplace you can sell the produce for just the cost of gas for a large truck. However, so can every other farmer in the local growing area. That means your local market has a lot of bananas and avocados, which drives down the price. The same item you could sell for 10 cents near home might go for $0.50 to $1.00 in a large US city.**

Having decided to ship your goods to the States, you have to decide which ones to sell. Do you want to send the so-so items that will sell in the low end of the price range above? It would still be better than what you can get at home, but it would barely cover the additional shipping costs. Keep in mind that the cost to ship it won't depend on the quality of the product. It costs the same to send a box of rotting bananas as it does to send the world's greatest bananas. This is why it makes sense to send the best: since the costs of shipping are fixed, you might as well ship the product where you'll make the greatest profit.

In economics this is known as the Alchian-Allen theorem,*** which Wikipedia summarizes as:

The moral of the story is that under linear transportation costs, it is profitable to send the highest quality goods to the market that is best able to pay for quality. This is why large cities in developed countries (especially in North America and Europe) can have excellent produce shipped in from virtually anywhere. In other words, it makes good economic sense for Manhattan to get the best shrimp.

* I have never been to New York City or Boston, so I am largely speculating. Based on available evidence I believe they exist and have quality produce, as do other large cities I have visited such as San Francisco. American supermarkets in smaller cities have improved substantially over the last few decades, but not everyone can have the best.

** These numbers are made up. If you have data, let's talk.

*** There has been some controversy over the theorem, but more recent work supports it. Tyler Cowen has discussed it in a podcast with Russ Roberts and a paper with Alex Tabbarok.