I have to admit an ulterior motive behind Friday's post. We discussed the Alchian-Allen theorem, which states that adding a fixed cost (usually but not necessarily for transportation) to the price of a good leads consumers to purchase more of the high quality good relative to the lower quality one. Although I hope that discussion was interesting enough in its own right it also serves as background for today. This post discusses the role of postbellum US internal revenue system, whose liquor tax collection efforts in the Mountain South constitute a slow but eventually successful state-building effort.

We have talked about state building before, and this post continues in that vein. The post-Civil War Mountain South was an extraordinarily difficult-to-govern region, both because of its geography and its population's unwillingness to cooperate with the central government. (Regular readers will recall that these two characteristics are often correlated.) Our discussion will largely be based on the paper, "The Revenue: Federal Law Enforcement in the Mountain South, 1870-1900" by Wilbur R. Miller (1989, JSTOR).

Here's the connection with the Alchian-Allen theorem. Corn is a commodity, and the quality difference between any two cobs is negligible. However, distilling whiskey from corn both raises its value and makes it easier to transport. According to research from Cornell's David Pimentel, "An acre of U.S. corn yields about 7,110 pounds of corn for processing into 328 gallons of ethanol." That's about 26.1 pounds of corn per gallon of pure alcohol.

Even if moonshine were only 100-proof (i.e. half alcohol), you have reduced the weight to be transported from 13 pounds of corn to around 8 pounds for a gallon of "mountain dew"--nearly a 40 percent reduction! Making higher proof could result in an over 60 percent weight reduction, drastically reducing transportation costs for Appalachian farmers. This also explains why bootleggers would try to achieve high alcohol contents for distribution and expect consumers to dilute the brew after it had been transported--it makes no sense to pay for shipping water content or other dilutions.

But all of these factors were in place long before the Union victory, so why did moonshining become more common afterward? The answer is taxes. From Miller's article:

The beer tax, which remained low, was collected easily. There was some traffic in untaxed tobacco, but whiskey taxes were the most difficult to collect. Moonshining developed as soon as the excises were imposed, and so many distillers evaded whiskey taxes that in 1868 the commissioner of internal revenue requested reduction of the tax from $2.00 to fifty cents per gallon, thinking the lower excise would be easier to collect. Indeed, the lower rate resulted in increased revenues, but the government continued to lose potential revenue to moonshiners. (p. 197) 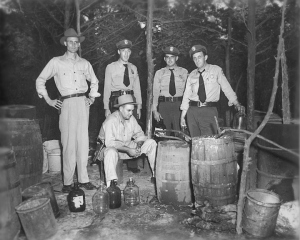 Resistance to the taxes, even when they were reduced, had both an economic and a political logic:

Moonshiners argued that they could not afford to absorb a whiskey tax of ninety cents per gallon or to pass it on to their customers. They believed that economic survival depended on evading the tax, but illegal distilling exposed them to confiscation or destruction of their still or to imprisonment. Mountain dwellers resisted the tax. They believed that a man had a fundamental "right to do pretty much what he pleases," arguing that "a farmer should have the same right to boil his corn into 'sweet mash' as to boil it into hominy." (p. 200)

It did not help the government's cause that revenue agents were often dishonest, responding to incentives of their own:

U.S. commissioners, who held preliminary hearings and issued warrants, and deputy marshals (often appointed as deputy revenue collectors), who served warrants and made arrests, received fees for each of their duties. Fee payment encouraged deputies to swear out warrants on doubtful testimony, leading to the arrest of innocent men. (p. 203)

Liquor taxes were serious business, though. The federal government carried a substantial amount of war debt and in 1895 the Supreme Court ruled that existing income taxes were unconstitutional, forcing the government to rely even more heavily on taxing goods like tobacco and whiskey:

The national government had developed a commitment to collecting taxes that it never had toward enforcing divil rights, because it was directly interested in the funds received. The whiskey tax became the largest domestic source of revenue. The excise on distilled spirits grew from 48 percent of all internal revenue in 1876 to 59 percent in 1982. (p. 214)

When Congress raised the whiskey tax to $1.10 (up from 90 cents) in response to the income tax decision, receipts immediately dropped and took five years to recover to their 1893 level. At the turn of the century states began to enact prohibition laws and made revenue collection and enforcement more difficult. Every "moonshine state" except Kentucky and Missouri was dry by 1916. Of course, this did not eliminate the moonshine business--it just made it that much more profitable.

For more on the topic of taxes, government control, and conflict, check out this working paper abstract from Anna Schultz, Nils Metternich, and Michael D. Ward (friends and colleagues, all). To follow up on the Alchian-Allen theorem and prohibition of various types see this post by azmytheconomics. If you want to know more about moonshiners in the 20th century, check out Last Call: The Rise and Fall of Prohibition by Dan Okrent and Bruce Yandle’s “Bootleggers and Baptists” theory (wiki, pdf, podcast).