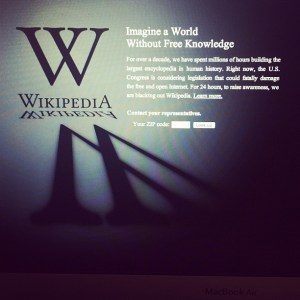 The January, 2012, Wikipedia blackout page. From @brainpicker on Instagram.[/caption]

2012 was a busy year for followers of internet politics. The SOPA controversy began in late 2011, and really picked up steam with the blackout protest on January 18. Later that month we shared news of the arrest of an Iranian programmer. In February, Jody Baumgartner put out a CFP on "The Internet and Campaign 2012". Henry Farrell's literature review, which we discussed in May, providing a solid foundation for the academic study of online politics.

In the second half of the year I argued that the internet is like a new geography to which that freedom-seeking individuals and organizations are fleeing, in a parellel to James Scott's ideas from The Art of Not Being Governed. These online communities have strong norms, including a high value place upon reputations and expectations for new members. Given these freedoms and norms, a certain level of internet crime may be acceptable. Despite security concerns, we also discussed how democracies are already using online voting and whether that technology might eventually become widespread in the US.

The last major event for internet politics in 2012 was the WCIT meeting in December. Prior to the meeting, proponents of internet freedom were concerned about the potential encroachment on human rights.  Given events like the internet shutdown in Syria and other dictatorial online activities, these fears were well-founded. However, thanks to members of the US delegation like Eli Dourado, a large number of countries refused to sign the updated treaty.

Major developments like these continue to suggest that the internet is a worthy subject of research for social scientists. On Wednesday we will discuss another review piece that brings home some of these points and raises new issues of interest.