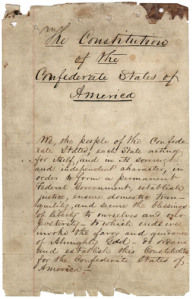 Shortly after Aaron Swartz's untimely suicide, O'Reilly posted their book Open Government for free on Github as a tribute. The book covers a number of topics from civil liberties and privacy on the web to how technology can improve government,  with each chapter written by a different author. My favorite was the fifth chapter by Howard Dierking. From the intro:

In many ways, the framers of the Constitution were like the software designers of today. Modern software design deals with the complexities of creating systems composed of innumerable components that must be stable, reliable, efficient, and adaptable over time. A language has emerged over the past several years to capture and describe both practices to follow and practices to avoid when designing software. These are known as patterns and antipatterns.

The chapter goes on to discuss the Constitution and the Articles of Confederation as pattern and antipattern, respectively. In the author's own words he hopes to "encourage further application of software design principles as a metaphor for describing and modeling the complex dynamics of government in the future."

In the spirit of Dierking's effort, I will offer an analogy of my own: civil war as fork. In open source software a "fork" occurs when a subset of individuals involved with the project take an existing copy of the code in a new direction. Their contributions are not combined into the main version of the project, but instead to their new code base which develops independently.

This comparison seems to hold for the US Civil War. According to Wikipedia,

In regard to most articles of the Constitution, the document is a word-for-word duplicate of the United States Constitution. However, there are crucial differences between the two documents, in tone and legal content, and having to do with the topics of states' rights and slavery.

Sounds like a fork to me. There's a full list of the "diffs" (changes from one body of text or code to another) on the same wiki page. But to see for myself, I also put the text of the US Constitution on Github, then changed the file to the text of the CSA Constitution. Here's what it looks like visually: 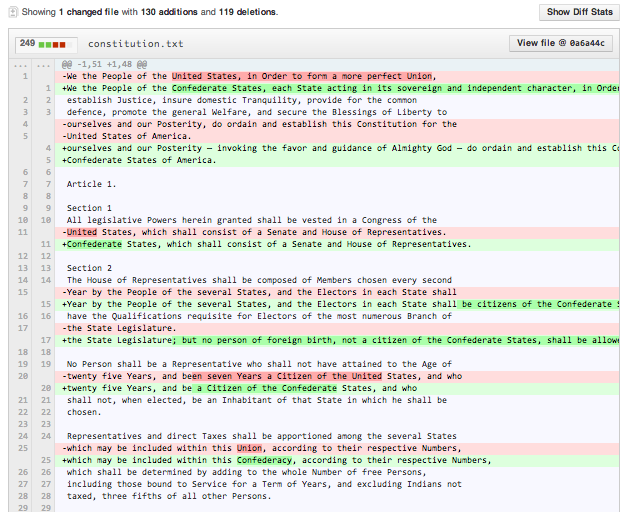 As the top of the image says, there are 130 additions and 119 deletions required to change the US Constitution into that of the Confederacy. Many of these are double-counts since, as you can see, replacing "United States" with "Confederate States" counts as both a deletion of one line and an addition of a new one.

I did not change trivial differences like punctuation or capitalization, nor did I follow the secessionists' bright idea to number all subsections (which would have overstated the diffs). Wikipedia was correct that most of the differences involve slavery and states' rights. Another important difference is that the text of the Bill of Rights is included--verbatim--as Section 9 of Article 1 rather than as amendments.

In other words, the constitution of the CSA was a blatant fork of the earlier US version. Are there other cases like this?