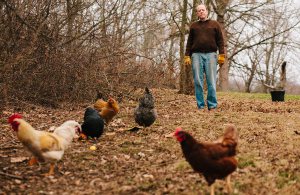 Scott photographed at home for an interview with NYT[/caption]

We talk a lot on this blog about micro-institutions. I initially used the term in October, 2011, and did not know of anyone else using it at the time. Since then I have found a paper from 2011 that uses the term, but I do not have any more specific date information. In the coming weeks I plan to flesh out more of what I mean by a micro-institution and review what we have learned about them so far here on YSPR.

Undoubtedly the work of James C. Scott influenced my thinking on the politics of everyday life. That's why I was excited to see this passage in his new book, Two Cheers for Anarchism:

For the peasantry and much of the early working class historically, we may look in vain for formal organizations and public manifestations. There is a whole realm of what I (JCS) have called "infrapolitics" because it is practiced outside the visible spectrum of what usually passes for political activity. The state has historically thwarted lower-class organization, let along public defiance....

By infrapolitics I have in mind such acts as foot-dragging, poaching, pilfering, dissimulation, sabotage, desertion, absenteeism, squatting, and flight. Why risk getting shot for a failed mutiny when desertion will do just as well?... The large-mesh net political scientists and most historians use to troll for political activity utterly misses the fact that most subordinate classes have historically not had the luxury of open political organization. That has not prevented them from working microscopically, cooperatively, complicitly, and massively as political change from below.

Certainly the overlap between infra-politics and micro-institutions is not one-for-one. Scott focuses on resistance and subversion, whereas I tend to emphasize cooperation and the role of norms in clarifying expectations of social behavior. Nevertheless Scott's pioneering work has been hugely influential on my thinking thus far, and all of his books come highly recommended.

Scott speaks at Cornell on The Art of Not Being Governed

Does the Internet Have a Political Disposition?