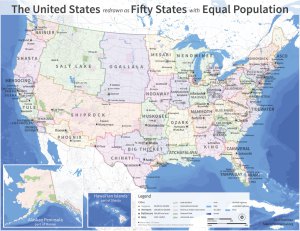 Rivers and oceans help to form natural boundaries, but if it's a straight line you can bet that it's essentially random--and it might even be in the wrong place:

Four Corners Monument, which marks the intersection of Arizona, Colorado, New Mexico and Utah, lies 1,807 feet (550 meters) east of where it would have been placed in 1875 had surveyor Chandler Robbins used a modern GPS device to pinpoint the coordinates he was tasked with locating.

Anyway, it doesn't matter now. Once set in stone, monuments become law. "Even if the surveyor made some grand mistake, once the monument is set and accepted, end of story. Where the monument is, that's where the boundary is," said Dave Doyle, chief geodetic surveyor at the National Geodetic Survey (NGS).

Those straight lines have a value though--they are easy to verify and make it simple to calculate the land area within a specified region. Linear borders for a parcel of land can increase its value up to 30 percent say economists Gary Libecap and Dean Lueck:

They look at the 116 billion square meters of land in the state of Ohio. Because of an accident of history, a large fraction of these square meters were assembled into irregularly shaped parcels via an uncoordinated process of private claims by independent individuals. The rest were assembled first into rectangular parcels along the lines of the survey called for in the Northwest Ordinance and then transfered to private ownership.

It’s worth reading the paper to get all the details, but the punch line is that this difference in the initial bundling of small bits of land had a lasting effect on how they are used. Today, more than 200 years later, a flat square meter is worth 30% less if it was initially assigned to an irregularly shaped parcel.

I have been reading up on border arrangements in Europe and Africa lately as part of a project on state-making. The best introduction I have found so far is that of Jeffrey Herbst, who argues that maps and formal boundaries were not developed in Africa because low population densities made them useless. In fact, it took until 1975 for population density of Africa to rival that of Europe in the 15th century. For another look at the randomness of borders, check out this paper by John McCauley and Dan Posner.