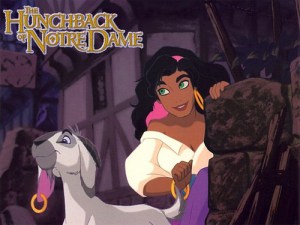 Cartoon gypsy Esmerelda in Disney's "The Hunchback of Notre Dame"[/caption]

Forthcoming from Peter Leeson (who previously brought us an analysis of pirate democracy), a new paper on self-governance among Gypsies (via Mike Munger):

Gypsies are nomads. They’re often separated from one another, which precludes direct monitoring. Further, Gypsies’ locations are changing continuously. In the past Gypsies arranged debris on roadsides and configured bits of torn cloth in nearby tree branches to communicate messages to passing fellow Roms (Yoors 1967: 126). Still, “As most of these Roms” were “constantly travelling about, the problem of communication with one another [was] a serious one” (Brown 1929: 158). Nomadism rendered direct monitoring impossible for all but a few and made society-wide communication very expensive for Gypsies. (pp. 12-13)

Gypsies’ inability to rely on government for many of their most important relationships means not only that they must enforce social rules regulating such relationships privately. More fundamentally still, they must create those rules in the first place. Romaniya superstition achieves this by folding worldly crimes—traditional antisocial behaviors, such as theft and contractual breach—into its “spiritual” crimes, such as using the wrong bar of soap to clean one’s head. Thus the “unbending notion of purity (and impurity) which governs most [of Gypsies’] behaviour” described above has two meanings: one “spiritual” and the other very much of this world (Liégeois 1986: 84). (pp. 15-16)