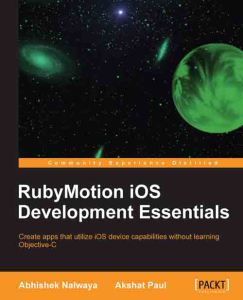 RubyMotion is a continued topic of interest on this blog, and I will likely have more posts about it in the near future. At this stage I am still getting comfortable with iOS development, but I would much rather be doing it in the friendly playground of Ruby rather than the Objective-C world. In addition to the RubyMotion book from PragProg, the next resource I would recommend is RubyMotion iOS Development Essentials.*

The book takes a "zero-to-deploy" approach, which is great for beginners trying to get their first app into the App Store. The first few chapters  will be redundant for developers who have worked with RubyMotion before, but they provide a helpful introduction to how RM works and the Model-View-Controller paradigm.

For several chapters the book uses the same example application, a restaurant recommender reminiscent of Yelp. Demonstrating code by building up from a simple application is a nice way of presenting the application. By the time readers have worked through these chapters they will have an example app that is more interesting than many of the toy apps in shorter tutorials.

Later chapters will benefit novice and experienced developers alike, because they fill a gap in the RubyMotion literature. Many tutorials overlook the process of testing RM code, and testing iOS in general can be challenging. The testing chapter of this book goes over unit testing, functional testing, and tests that rely on device events such as gestures.

My favorite chapter in the book was chapter 6, which goes over device capabilities. At 46 pages this is the longest chapter in the book, covering GPS, gestures, Core Data, using the Address Book, and more. I especially enjoyed working through the section on accessing the camera and Photo Library. This is difficult to test on the simulator since there is (obviously) no access to a built-in camera (as with certain iOS devices including some iPod Touch models), but the example app covers how to handle this gracefully.

Stylistically, it can be a challenge to lay out a book that uses iOS API jargon like UIImagePickerControllerSourceTypePhotoLibrary. There were some gripes with the authors' choice of two-space indenting, but that is my preference so it did not bother me. One addition I would have preferred would be additional formatting for the code, using either colors (for the e-book) or bolding (for the print version) to distinguish function names and help the reader keep their place in the code. The apps themselves rely mainly on iOS defaults. This is common in tutorials, but it also helps them look natural in iOS 7. Most of the time I was working through the book I used the iOS 6.1 simulator, but it was no problem to upgrade to iOS 7.

As a whole this book is a thorough introduction to RubyMotion development. It has several key features that are missing from other RubyMotion tutorials, including an emphasis on testing code. This book makes a great resource for new RubyMotion developers, or developers who want to use more of the device capabilities.

*Note: For this review I relied on the e-book version, which was provided as a review copy by Packt Publishing.