In April of this year, Denver-area residents welcomed the opening of the A Line to great fanfare. Also known as the “Train to the Plane,” the A Line connects Denver International Airport to Union Station in downtown Denver.

The excitement was short-lived, however, as the A Line quickly gained a reputation for frequent delays and closures. Stretching as it does over 23 miles of mostly-new track, some initial hiccups were to be expected. But given the strict time tables of air travel, having to disembark from the train and take a bus shuttle in the event of a closure caused many Denver residents to forego this option.

Is the A Line’s reputation for unreliability deserved? To answer this question, I collected and analyzed all tweets from the @RideRTD Twitter account where delays and closures are announced. (Data and code can be found on Github; thanks to cfrazier91 and yanofsky for example code.) The visualizations below explore this data to determine how the A Line compares to other lines and whether it has improved over time. The data consist of all delays and closures announced by RTD’s Twitter account from April 22 (when the A Line opened) to November 19, 2016, with the duration and extent of the outage when available.

Are delays more common on the A Line?

Do delays occur more frequently on the A Line than other lines? Here is the total count of delays (not including line closures) for the period collected: 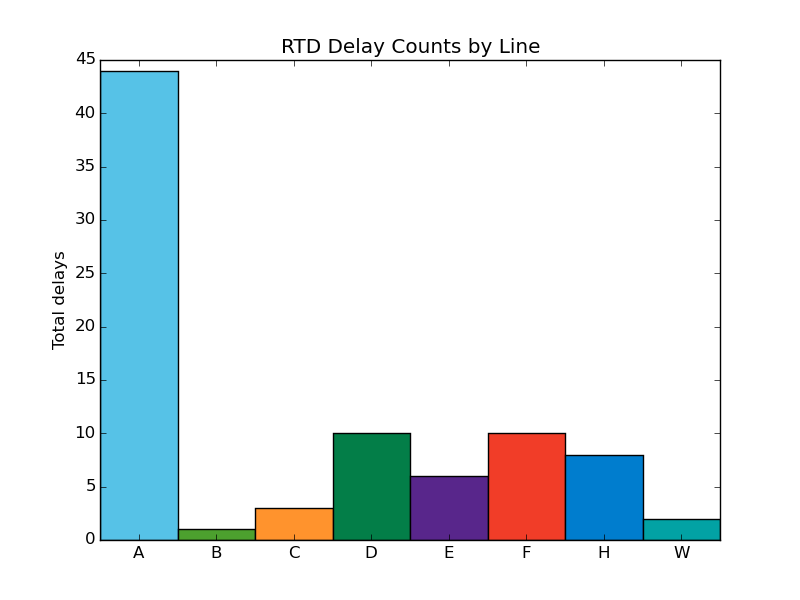 The A Line does poorly on this metric. Not only did it have more delays than any other individual line — it had more delays (44) than all other lines combined (40). It is evident from this metric how the A Line so quickly became a byword for unreliability.

How long are delays on each line?

This question asks about the magnitude of delays on each line, in minutes. The RTD Twitter account often expresses delays as a range, such as “10-15 minutes.” When that type of range was used, this data records the upper bound of the estimate. 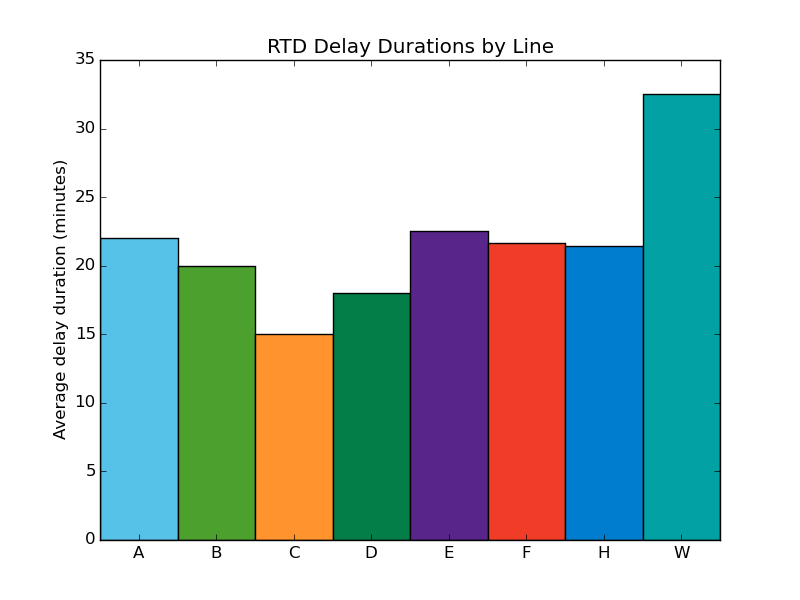 Does the A Line have the longest delays? No, that honor goes to the W Line, which runs from the western suburb of Golden to Union Station. (A full map of the RTD Light Rail system can be found here.) The A Line is near the median for delay duration.

How long do outages last on different lines?

A 10 minute delay that lasts for half an hour is one thing. A delay that lasts all day is another because it will affect many more travelers. How does each light rail line stack up when it comes to the extent of delays? 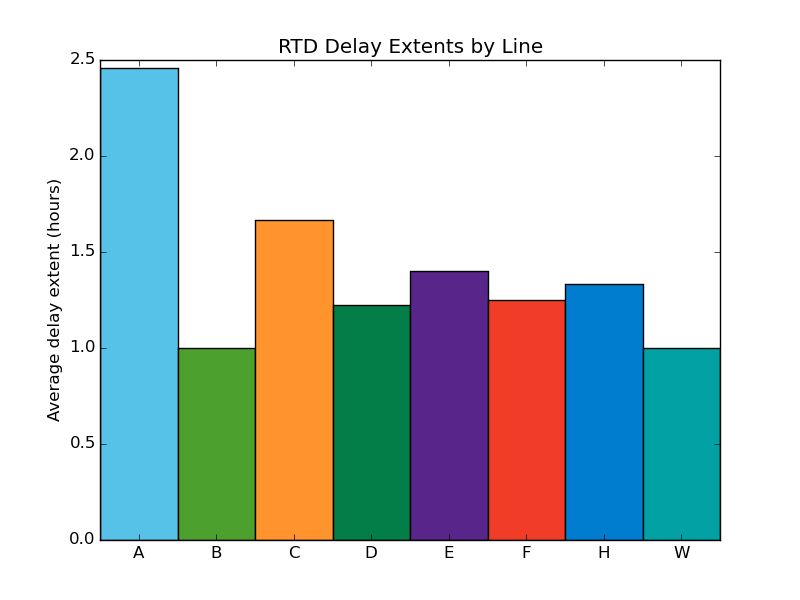 Extent of delays on each light rail line

Here the A Line is again at the bottom of the pack. When delays occur, they typically last for a longer portion of the day (nearly 2.5 hours) than on any other line. The W Line, by contrast, does very well on this account which may be why it has a better reputation than the A Line.

How often do line closures occur?

A closure is worse in some respects than a delay, because it requires finding an alternate route (for scheduled closures) or taking a bus shuttle between stations (for unscheduled ones). How does the A Line fare when it comes to full or partial line closures? 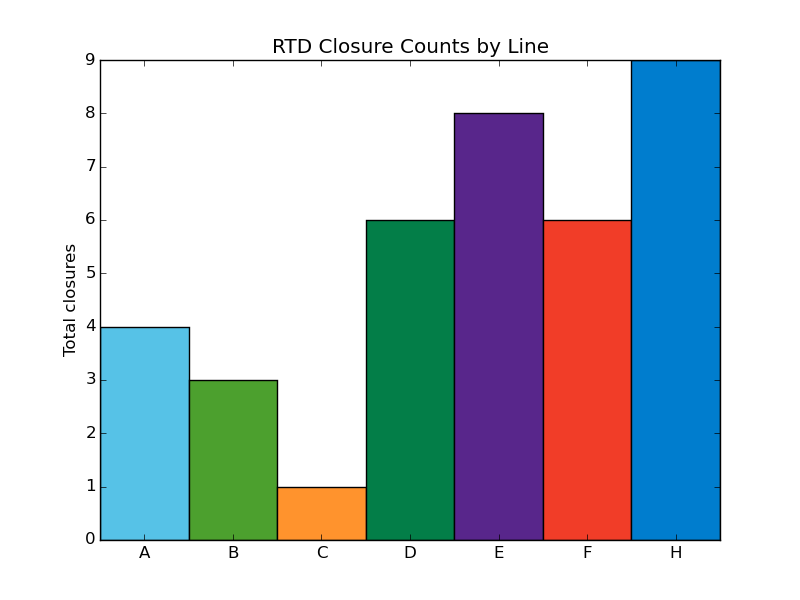 Not bad — once again the A Line has about the median number of closures for this period. The H Line has considerably more closures, and the W Line had no closures reported by RTD for these seven months.

Have delays become less frequent since the A Line launched?

Surely a brand new and rather long light rail line is expected to have some growing pains as it launches. Have delays become more or less frequent over time? (Note that this chart excludes data for the partial months of April and November, to make the counts comparable over time.) 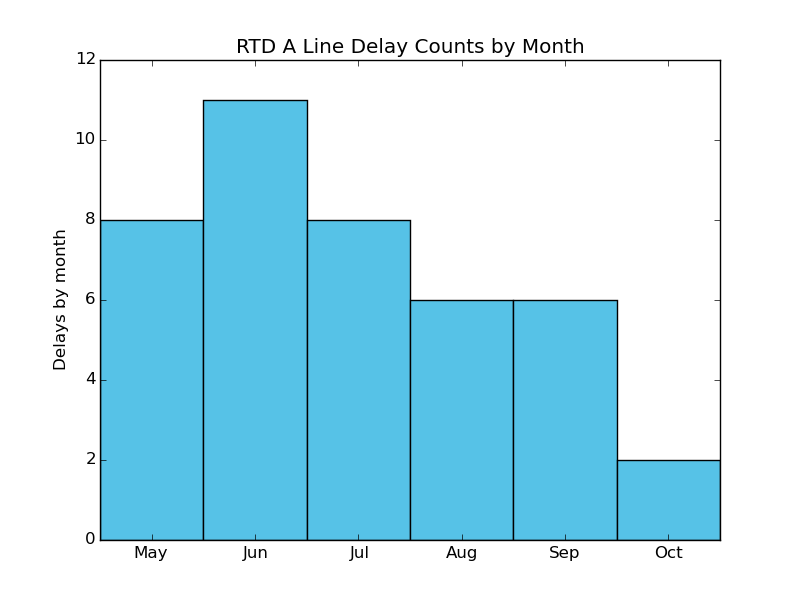 Here we can see that the A Line got off to a rough start but has improved substantially over time, from a high of 11 delays in June to a low of two in October. This suggests that the initial issues have been worked out and that in the near future the A Line will be about as reliable as other RTD light rail lines.

This analysis has shown that evidence on the A Line’s reliability is mixed. Although it had the most and longest-lasting delays, those delays tended to be about the same length as other lines. The A Line also had relatively few line closures. It is easy to see how this line earned a poor reputation in its early days, but the frequency of delays is decreasing over time.

There are other questions that could be investigated with this data as well. If we assume that every mile of track on a line has the same failure rate, what is the failure rate for each line? This would help to fairly compare longer lines such as A and W with shorter lines. And are the occurrence and duration of failures correlated across lines? The spatial dimension of this would make sense since many lines share the same sections of physical track. There may also be a temporal component, with bad weather or other exogenous events causing closures on the same days and times.

RTD is one of the few public transportation systems in the U.S. that is actively adding light rail lines. These ongoing expansion projects are ambitious and deserve a fair assessment. Maybe it’s time to give the “Train to the Plane” another chance.